The Company Man Summary of The Essay by Ellen Goodman (1941)

“The Company Man” by columnist Ellen Goodman describes the life of a corporate worker posthumously and is written similarly to an obituary...

Summary of The Company Man 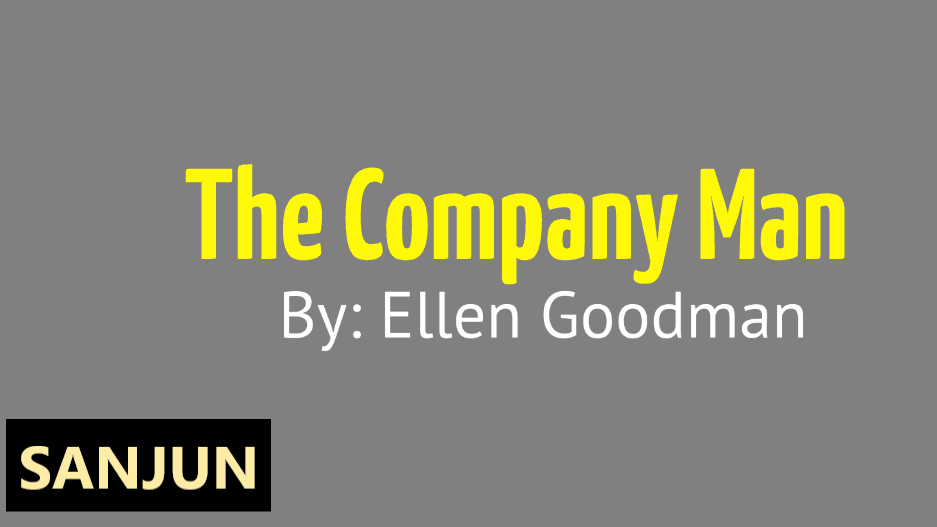 “The Company Man” by columnist Ellen Goodman describes the life of a corporate worker posthumously and is written similarly to an obituary. Through this piece, Goodman portrays the daily tasks and family of Phil, a hardworking and dedicated company employee. Although she describes Phil’s life and family, Goodman uses form follows function, irony, and juxtaposition to display her disgusted and disappointed attitude towards Phil’s life. Goodman structures her column by describing Phil’s life through the lens of an obituary.

In this essay, Goodman describes a man who died at fifty-one.

2nd Child: Daughter: 24 years and newly married. She lives near her mother

Main Summary of the Essay The Company Man

Goodman tells the story of Phil, a hard-working businessman who eventually worked himself to death.  She uses the name ‘company man’ to show how Phil was not just a man but was an extension of his work.  In the essay, Goodman uses Phil’s name only a handful of times.  By not saying his name, she uses Phil as a symbol for all businessmen and women who work themselves to literal death.

One of the most powerful lines in the essay is the last line.  At the end of the narrative, Phil’s boss begins to look for a replacement for him on the day of the funeral and asks, “who’s been working the hardest?”  Goodman used this anecdote (narrative) to show how what happened to Phil can and will happen to anyone.  This question represents the vicious (ruthless) cycle that is present in today’s world.  Even though Phil had just worked himself to death, the next person to take his place was supposed to be someone who had been, ‘working the hardest.’  Goodman mocks modern culture and how there is no time to waste, but only time to work.

Because this essay tells the story of Phil’s life and interacts with his family, the entire essay is dripping in pathos (the quality that evokes pity and sadness).  The essay talks about each of his family members and how close they were to their father or husband.  With each story, it is obvious that Phil spent so much time at work that he did not really know his family.  When a family friend comes up to his wife and says, “I know how much you will miss him,” his wife replies, “I already have.”  Phil’s wife implies that she has missed him long before he was dead.  To not be close to your family, or even know them really, is a very difficult situation to be in for anyone.  The very little relationship between Phil and his family evoke a lot of emotion from the reader.  This emotion makes the reader think about Goodman's point that one should spend time on things of real value, not just monetary value because one day they will be gone.

Rather than simply stating that Phil had died of a “coronary thrombosis (blood clot),” Goodman says, “He worked himself to death, finally and precisely, at 3:00 a.m. in the morning,” thus firmly planting the seed in the reader’s mind that work caused his death. Goodman then dismisses all notions of sympathy by stating that neither his family nor friends were surprised by the news. She repeats this sentence three times throughout the passage, emphasising Phil’s death as she constantly reminds herself of the facts that impacted her life. This in turn shows her resentment towards Phil by her inordinate sentences leaning towards her point of anger, while at the same time constantly using numbers to emphasise the fact that Phil was nothing but a statistic: “fifty-one years old ¦worked six days a week, five of them until eight or nine at night ¦overweight by 20 or 25 pounds.

The Analysis of the Company Man

v Post a Comment
We would be happy to receive constructive feedback and suggestion. Thank You in Advance.

Sorry, we detected that you have activated Ad-Blocker.
Please consider supporting us by disabling your Ad-Blocker and refresh the page, it helps us in developing this Site.
Thank you for understanding :)